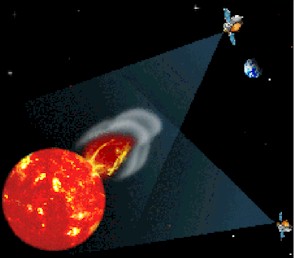 Welcome to the Home page of the STEREO Space Weather Group. The intent is that this be an open web site, where anyone from the scientific community can follow our efforts to prepare computer programs, modeling efforts and research studies in p reparation to use the STEREO observations as a tool for Space Weather. We also invite scientists from outside the SECCHI or STEREO consortia to join in the group's efforts. We describe below the procedure to join the Space Weather group.

The overall purpose of the Space Weather Group is to help coordinate space weather efforts involving the STEREO mission and its instruments, including that of individual team members, and to help coordinate those efforts that lead to tools and products that can be tested and used before and after the STEREO launch. The STEREO real-time Beacon is a major STEREO effort having Space Weather implications. Other activities of the group include incorporating and interfacing STEREO data and space weather activities with: (1) Imaging and in-situ data from other existing space missions such as ACE, Wind, SOHO, Ulysses, GOES-12 SXI, the Transition Region and Coronal Explorer (TRACE) and Solar Mass Ejection Imager (SMEI), and ground-based observations such as interplanetary scintillation (IPS), optical line and broadband and radio emission, and future missions planned for the STEREO time frame, such as Solar-B, GOES-13 SXI, and the Solar Dynamics Observatory (SDO); (2) The Geospace community to understand the coupling of and responses to CMEs and other transient disturbances by encouraging and participating in space weather campaigns; (3) The Community Coordinated Modeling Center (CCMC) and other simulation and modeling groups to use STEREO data as input to space weather models; (4) The SECCHI 3D Reconstruction and Visualization Team to develop mode ls that have a space weather context; (5) The various virtual observatories that are being developed; (6) The International Heliophysical Year (IHY) program in 2007-08; (7) Meetings and workshops involving space weather; and (8) NASA’s PAO EP/O and other outreach activities.

If you wish to join the Space Weather group and be placed on its e-mail list for future messages,
please send an e-mail message to D. Webb at david.webb@bc.edu. Note that membership implies being willing to work towards the Space Weather goals of the STEREO mission.

The Space Weather Group consists of teams of scientists at particular institutions and individual scientists. Follow links below to learn about the various efforts underway by these group members.

SECCHI is a suite of 5 scientific telescopes that observe the solar corona and inner heliosphere from the surface of the Sun to the orbit of Earth.